14 Must Eat Foods at The Richmond Night Market 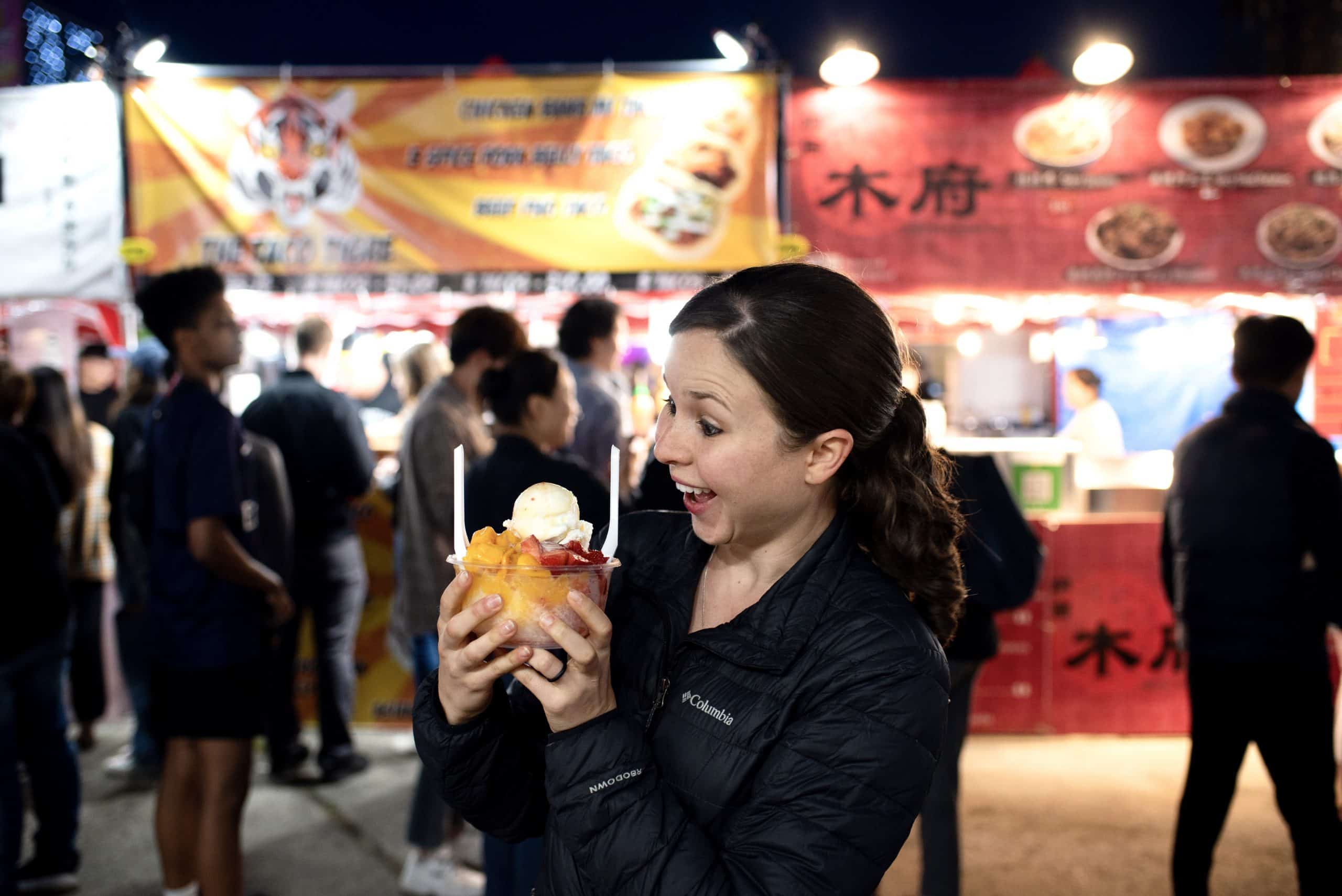 Visiting the Richmond Night Market soon? This guide will give some important things to know before you go and some of the best foods you must try!

A couple years ago, shortly after we moved to Seattle, Adam came across photos on Instagram of hundreds of tents, colorful lights, and delicious food at the The Richmond Night Market, which is the largest night market in North America with over 1 million visitors between May and October (when it is open). “We HAVE to go here!” he said to me, but for some reason, the timing was just never right and we didn’t go.

Fast forward to this past weekend and we finally did it! We planned a weekend trip to Vancouver, mostly centered around going to the night market, which is located south of the city. We tried to prepare our stomachs throughout the day for what it would endure that evening, arrived to the market early, waited in a long line, paid the entrance fee, and then STUFFED OUR FACES!

It was a crazy busy, but glorious evening trying different foods from all over the world. We left with stomach aches from all of the food we ate (and we didn’t even try everything we wanted to!), but we have #noragrets because it was worth every single bite!

Check out our vlog below to see all of the spots we ate at and keep scrolling to see our tips to surviving the market, see which spots we loved, and see the spots we wished we could’ve tried!

Note: We went May 2019 and noticed that some vendors from last year were not there this year, so we can’t promise that all of these spots will be around in future years!

PS: Looking for more ideas of things to do in Vancouver? Check out our Weekend in Vancouver guide!

When visiting the Richmond Night Market there are a few things to keep in mind to make sure your visit is a success!

So without further ado, here are our must-eat items at the 2019 Richmond Night Market!

This was my (Kathryn’s) favorite savory spot of the night! We have been on a pork belly kick lately, so stopping at Teppan Bossam was a no brainer. There are four different kinds to choose from: garlic, spicy, barbecue, and teriyaki. We went with the spicy, which wasn’t really spicy, but just had awesome flavor. It comes with kimchi as well!

This was Adam’s favorite savory spot of the night! We had no idea what pork hocks were before this, but they sure are delicious! We went towards the end of our eating extravaganza and didn’t even want more food, but seeing the pork hocks spinning on the rotisserie was too tempting and we caved.

The meat had a nice crunch on the outside and was so soft on the inside. Bonus: you get to add BBQ sauce and mustard to your pork hocks with utters, which made us laugh!

We both agreed that this was our favorite sweet treat at the Richmond Night Market! Icy Bar serves up Taiwanese shaved ice, which has ice, fruit juice, fresh fruit, and ice cream on top. We got the strawberry and mango flavor and it was the BOMB! The ice isn’t as fluffy as Hawaiian shave ice, but the flavor combos + the ice cream was so delicious.

Asomi Mochi was one of the spots we were most excited to try because I (Kathryn) had never had mochi and wanted to try something new! The strawberries have red bean paste on them and then are wrapped in the mochi of your choice. We got the chocolate and the purple yam mochi, but they also had a cheesecake one that sounded amazing. Both flavors were super tasty and the texture of the mochi with the strawberry was unlike anything we have had before. This was definitely one of our top spots!

We discovered Fries and Things about an hour before leaving for the market while Adam was researching where to eat. We love fries, especially ones loaded with stuff on them, and these were really good! We got the Pho fries, which is their signature dish (they have a couple other kinds as well), and to be honest we aren’t sure what all was on them, but the flavors did resemble pho!

Potato on a stick? Count us in! The line for this spot was very long, but for good reason–it was so dang good! The potatoes are essentially spiraled onto a stick and then fried and topped with the seasoning of your choice. We got sour cream and onion and a garlic one and both were amazing. The potato stays soft on the inside, so it’s less of a chip and more like a very thin french fry. Now we are drooling just thinking about it!

There are quite a few meat skewer spots in the market, but we had read good things about this one. The line was crazy long, but it was definitely worth it! We got 5 skewers total–steak, lamb, chicken, and prawns and they were all extremely flavorful. It’s also very fun to watch Chef James make them!

Adam loves sushi and loves tacos, so getting a combo of the two was extremely exciting! I didn’t try this one because I am still working on the whole seafood thing, but Adam loved it! It was a fried seaweed shell that was super crispy, with rice inside, sauce, and salmon. Definitely a must-try if you love sushi!

This was our final stop of the night and was a spontaneous decision. We actually aren’t sure if Yummy Yogurt is the real name, but that’s what the cup said so we are rollin’ with it. We had wanted this bagged sippy tea we saw online from last year, but we couldn’t find them in the market, so we settled for this yogurt spot instead!

We had seen lots of people walking around with the cup in their hand, so we figured it had to be decent. They had a handful of different flavors, but the guy working there said the purple rice was the best, so we got that one. And it was really good!

The best way to describe this is that it’s a yogurt smoothie with chewy little chunks inside (the rice). It wasn’t overly sweet, which was much needed after the sugar we had already, but it still ended the night on a sweet note!

The next 5 spots are places we did NOT get the chance to try unfortunately (which is why we don’t have photos), but definitely want to next time!

We really wanted to try this (even I was willing to give it a taste!), but we were just too full by the time we got to the stand. These crackers are MASSIVE and basically are just compressed prawns. Crazy!

By the time we made it to this stand they were all sold out 🙁 But that’s probably a sign that they are as good as they sound! As the name implies, this is mac and cheese inside of a roti, which is like an Indian flatbread. Yum!

Fried chicken as big as yo face! Adam would’ve had to partake in this one alone (gluten free life is the worst!), so he skipped it because he wasn’t sure he could eat a whole one by himself + everything else we wanted to eat. But it sure looked good!

We have no idea if this is actually good or not, but if you want something super unique and Instagrammable, get the rainbow grilled cheese from Say Cheeeese. We saw so many people eating this and snapping pics as they pulled it apart. It looked fun!

Are you hungry yet?

Pin this guide to plan your trip to the Richmond Night Market!

Before driving the Alaska Highway, we had heard fr 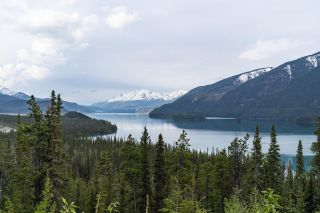 One of the spots we were most excited to check out 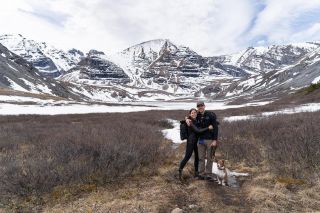 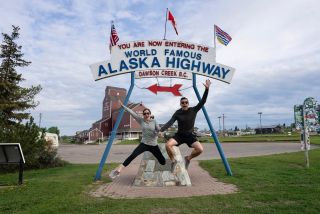 12 awesome stops from Whistler to Dawson Creek in 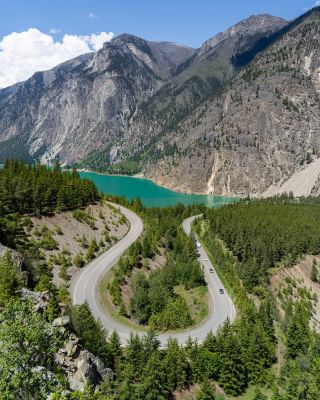 For the next stretch of our drive up to Alaska we 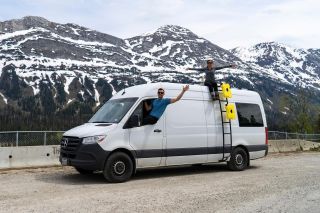 All aboard!🚂 Our visit to Whistler (late May) 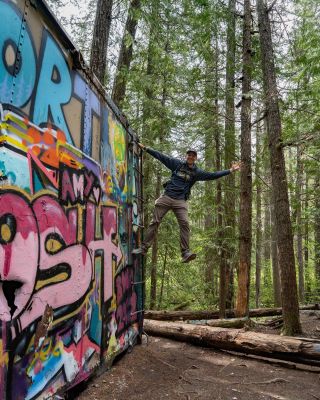 Before driving the Alaska Highway, we had heard fr

One of the spots we were most excited to check out

12 awesome stops from Whistler to Dawson Creek in

For the next stretch of our drive up to Alaska we

All aboard!🚂 Our visit to Whistler (late May)

The time has finally come...we're making the final 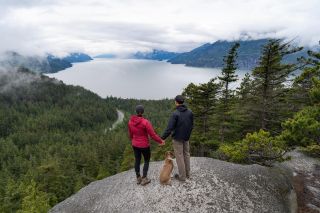 ⬇️ How we spent one jam packed day in Victoria 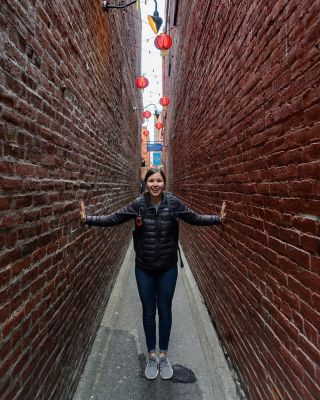