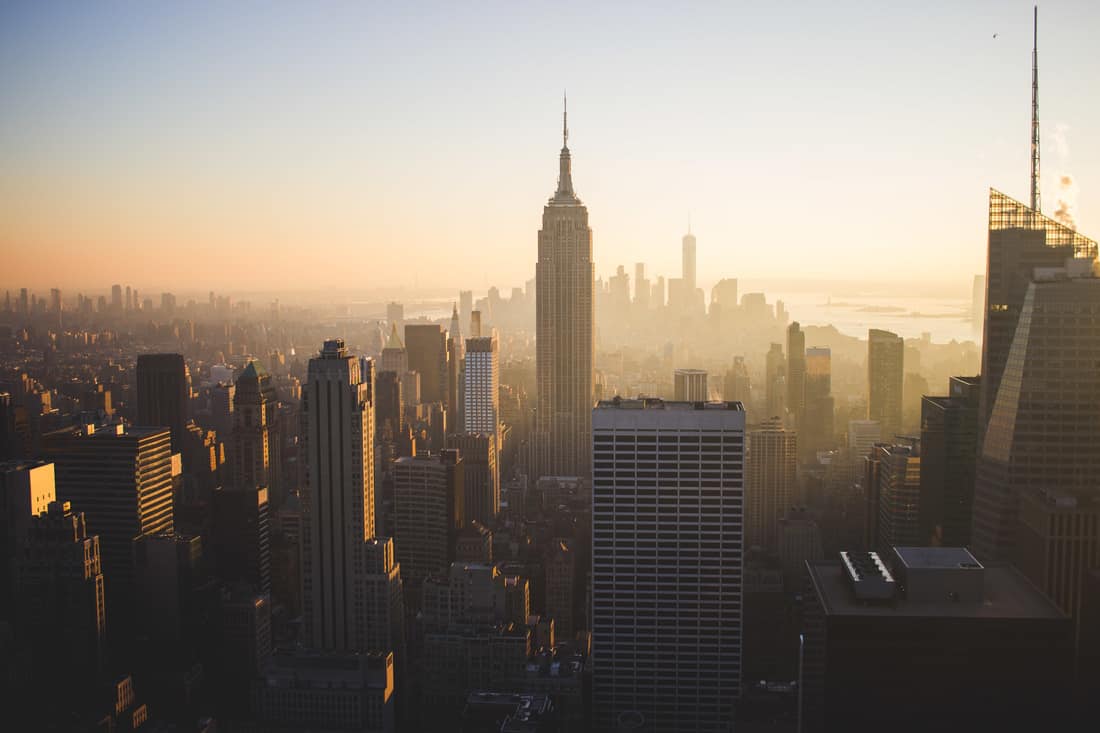 To celebrate our one-year anniversary (a little late, but it still counts!), we headed to NYC for a long weekend. I had been to NYC twice before, but Adam had never been, so I was really excited to show him around. While our anniversary was in October, we decided to wait to go until this past weekend so we could see the city at Christmastime. We worried about visiting during a chillier time of year, but the weather was perfect the entire time—sunny and highs in the 50s. We landed around 12:30 on Friday and headed to the city via train from Newark. I had never flown into Newark before, but since Southwest flies there, we decided to try it out. I am so glad we did because it is super easy to get to the city from Newark. The airport may not be glamorous, but we made it to the hotel within 45 minutes from landing and for pretty cheap. 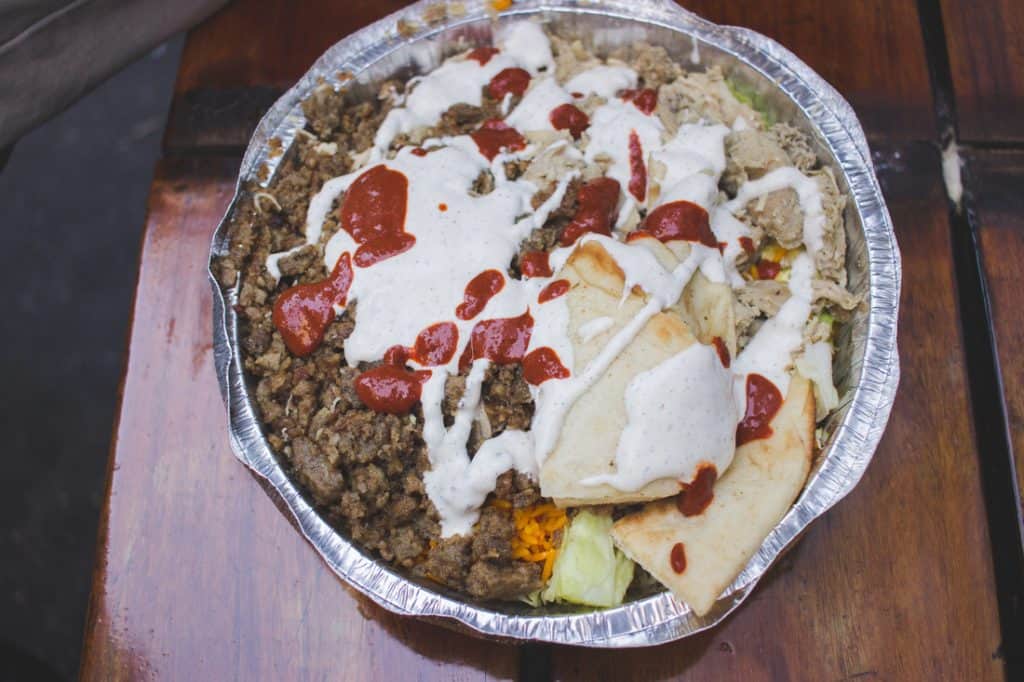 ​Once we checked into the hotel, we headed straight to get some food. We were starving and starting to get a tad hangry, so we booked it as fast as we could to a spot we were both dying to try, Halal Guys.  We got the combo (beef and chicken) with rice and it was AMAZING.  I had read so many good things, but I wasn’t prepared to love food from a cart this much. We went a tad overboard with the red sauce (super spicy), but the delicious white sauce helped balance it out. After devouring our food, we walked over to Gregory’s Coffee for some much needed caffeine and then headed to Bryant Park. 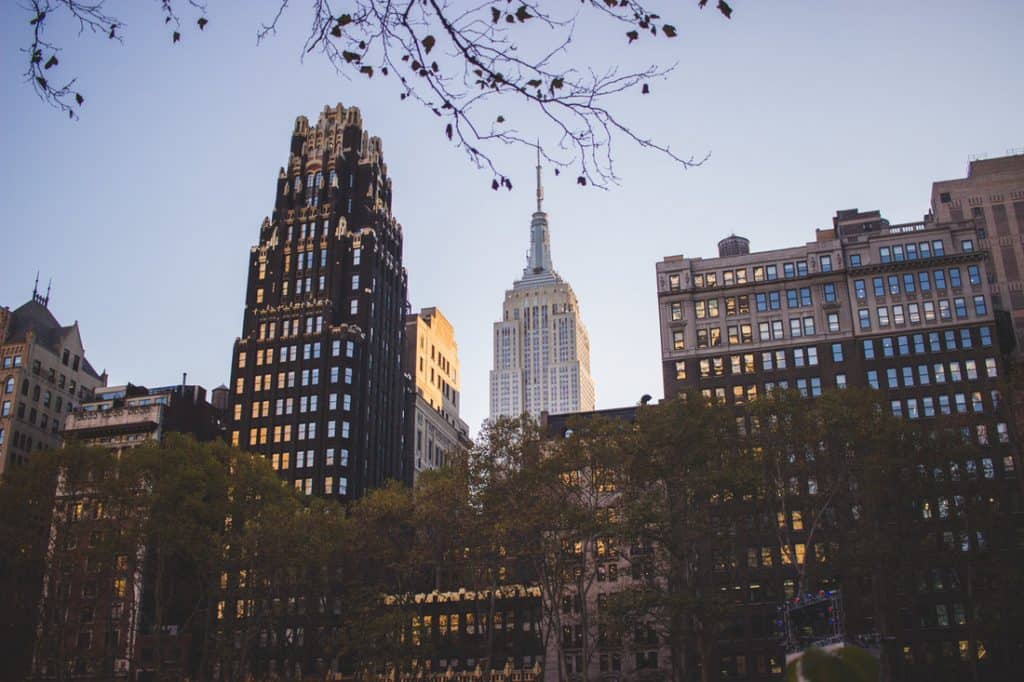 Bryant Park is such a fun spot to visit at Christmastime. They have a big tree, an ice skating rink, and tons of little stands with food and items to buy.  We walked around a little bit and then headed to Times Square. Times Square is definitely the biggest tourist trap in the city, but I had to show it to Adam so he could say he had been there. We went into a few shops and did some people watching. There are TONS of interesting people to see in Times Square, so that was entertaining. 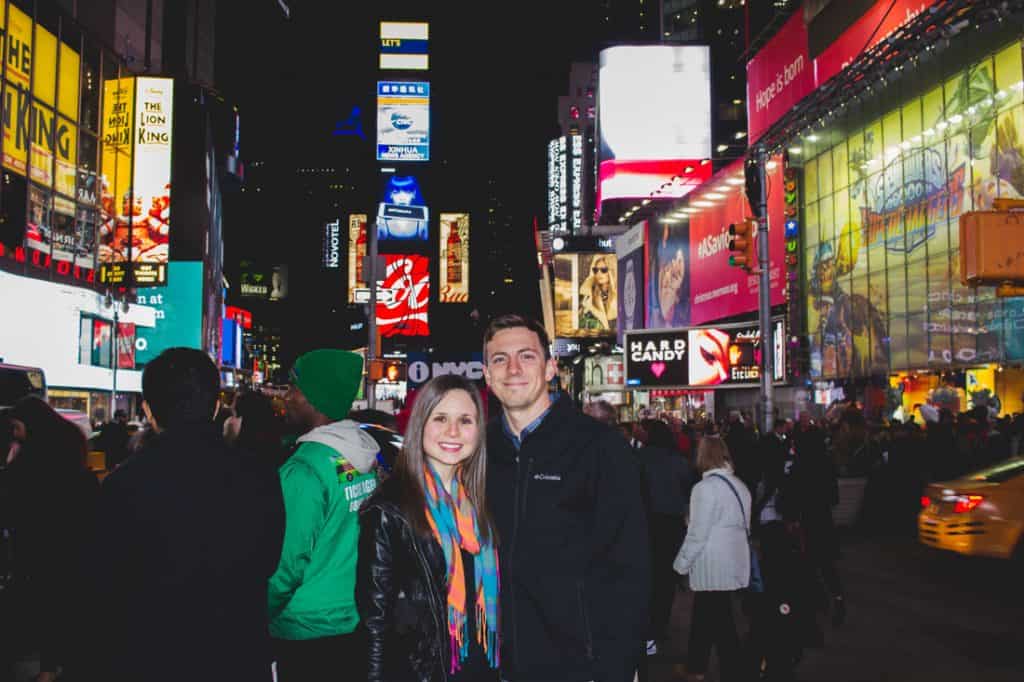 ​After leaving Times Square, we took Adam’s first ever Subway ride to The Meatball Shop in West Village. Adam’s coworker recommended this spot and it was incredible. We got beef meatballs with red sauce, beef mac and cheese meatballs with Parmesan sauce (their special meatball for the week), and a side of spaghetti.  We highly recommend checking this spot out if you’re ever in NYC (they have multiple locations around the city).
​We love dessert, so we headed to Big Gay Ice Cream after dinner to get something sweet to eat. We always like to share food so we can try more than one thing, so we got the Bea Arthur and Salty Pimp cones. We loved both, but agreed that the Salty Pimp was the winner. 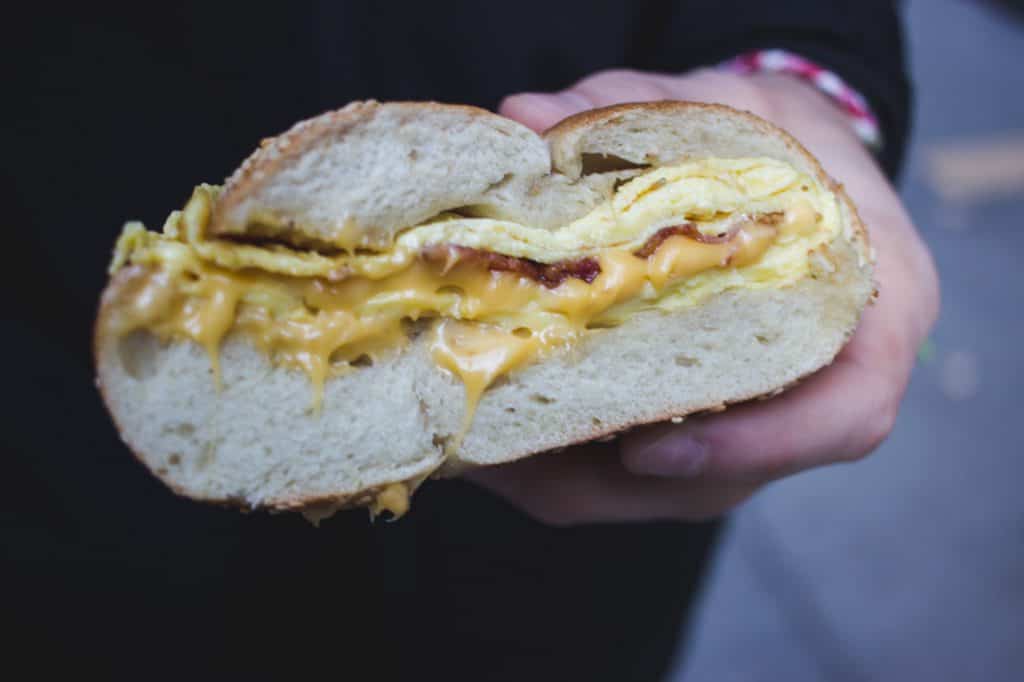 ​I deemed our second day in New York “Christmas Day” because our plans consisted of a few holiday related activities. We kicked off the morning with some bagel sandwiches from “Best Bagel & Coffee,” which was both of our first experiences with true New York bagels, and walked over to Radio City Music Hall to see the Rockettes. When I came to NYC in December 3 years ago I saw the Radio City Rockettes Christmas Spectacular show and loved it, so I knew we had to do it during this trip. I was kind of worried that Adam wouldn’t like it, but thankfully he said he enjoyed it.  The show puts you in such a cheerful and festive mood and I was kind of worried that it wouldn’t be Adam’s cup of tea, but he said he really enjoyed it.
After the show, we grabbed some coffee from Blue Bottle and made our way down 5th Ave to Central Park. We spent a couple hours strolling through the park, enjoying the fall foliage. We walked about halfway up the park and then headed to Shake Shack for lunch. We have Shake Shack in Austin now, but it is our favorite burger and we weren’t going to pass up a chance to have it in its birthplace. 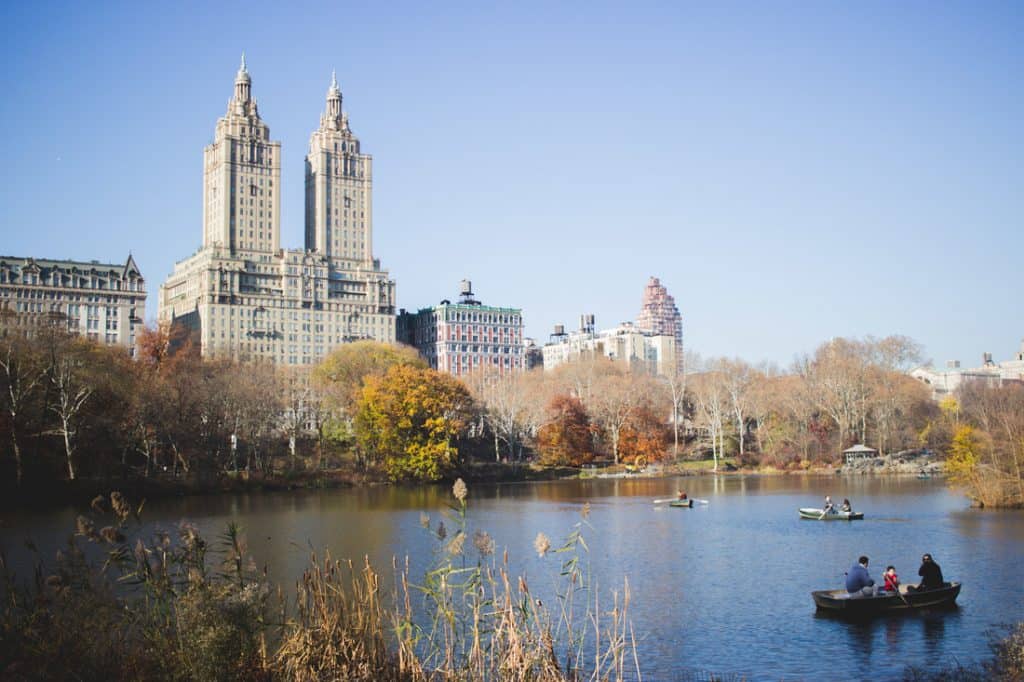 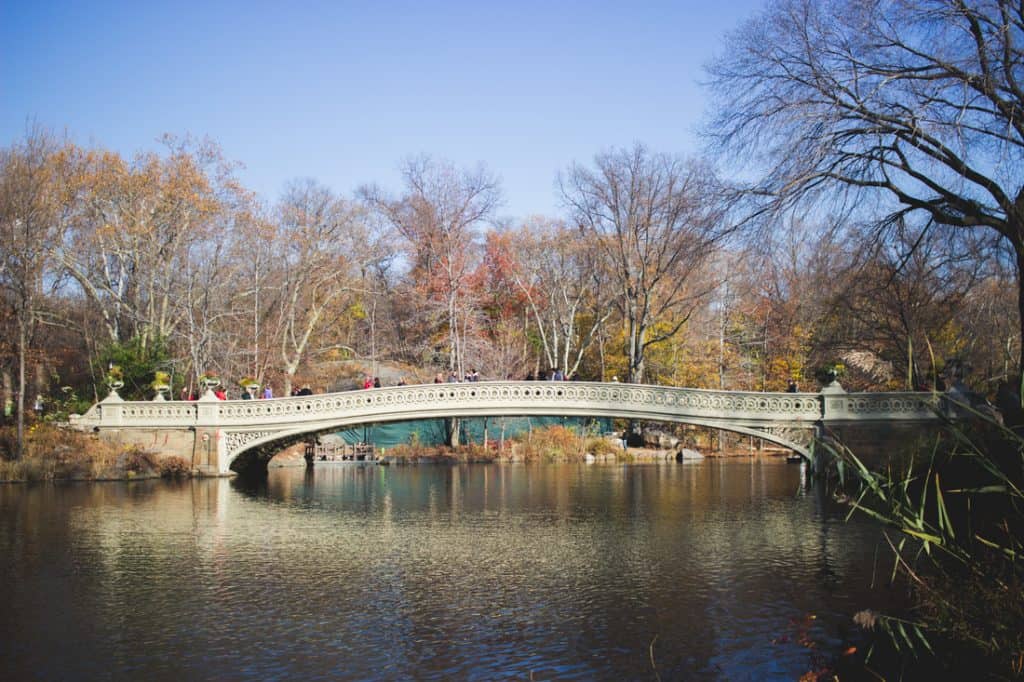 ​Next we headed to Top of the Rock, which is one of my favorite spots.  We got up there about 45 minutes before sunset and stayed for a while to see the city both during the day and at night. Unfortunately the sky was very hazy so it made photographing everything a little tricky. We went to go see the Rockefeller tree after, but it was a mob scene full of thousands of people and lots of pushing and shoving. I had never seen it so packed before, so we decided to come back later in the evening when the crowds hopefully died down. We were going to go to a nice Italian restaurant for dinner, but I wasn’t feeling too well and the only thing that sounded good was more Halal Guys.  Adam was all for this idea so we grabbed some to-go and headed back to our hotel to relax before going to explore more. 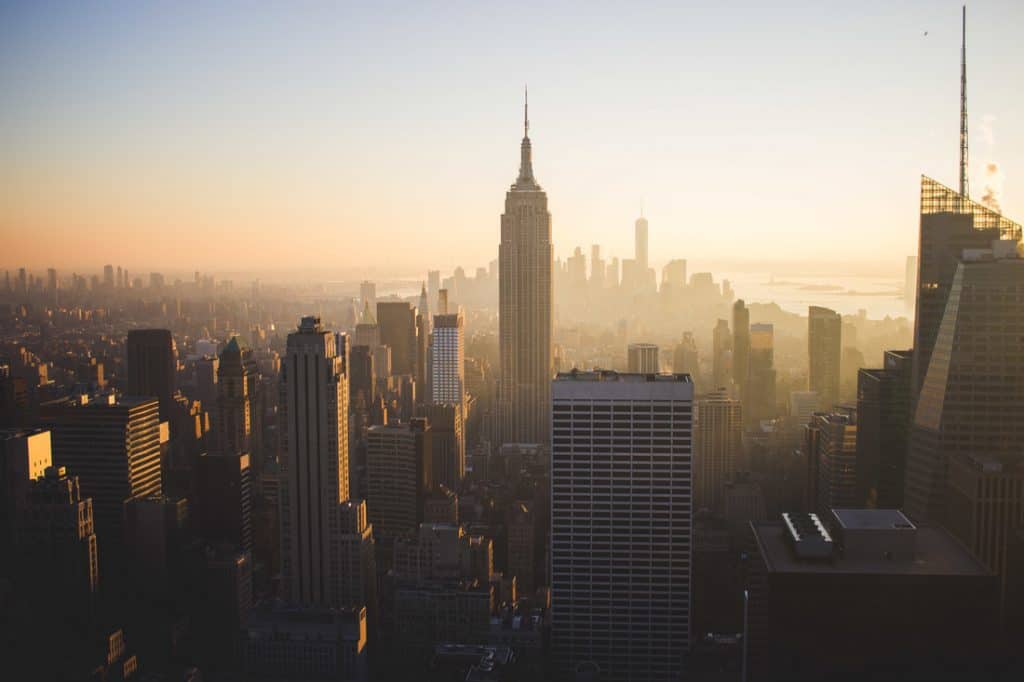 ​After resting our feet for a bit, we went back out to get waffles at Wafels and Dinges (yum!) and to go attempt to see the tree again. Thankfully the tree was less crowded, but still packed, and we managed to get a couple good photos of it before going back to the hotel to pass out.  At this point, we had walked about 25 miles within a day and a half and were completely exhausted. 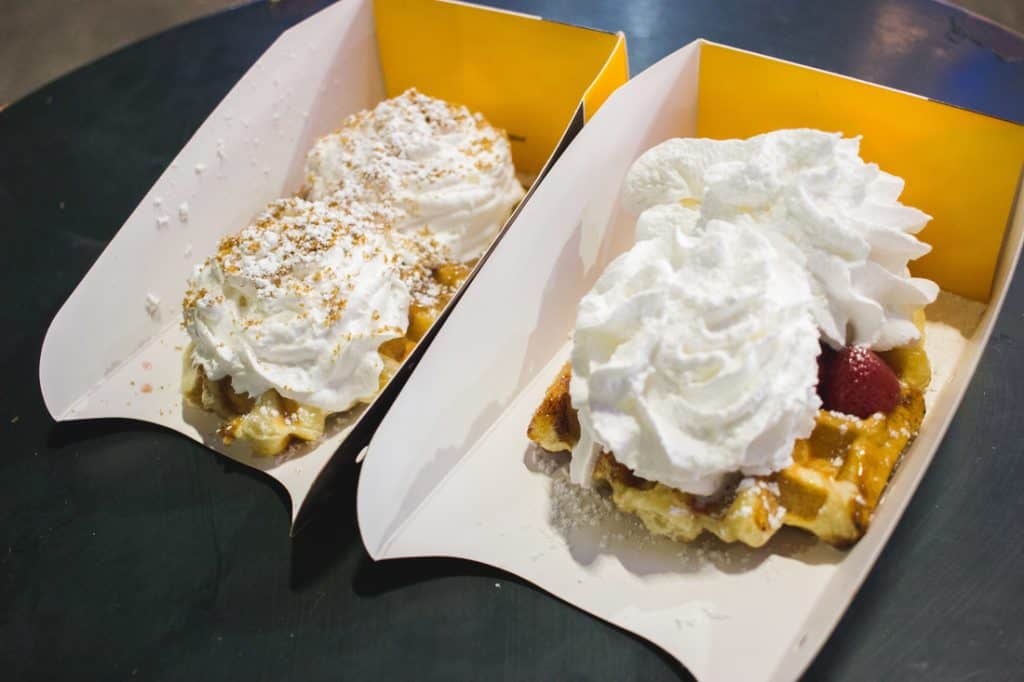 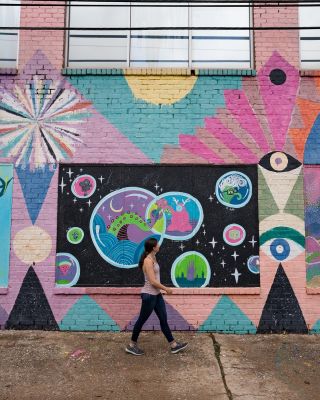 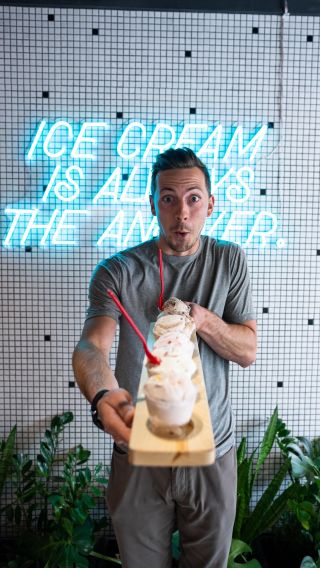 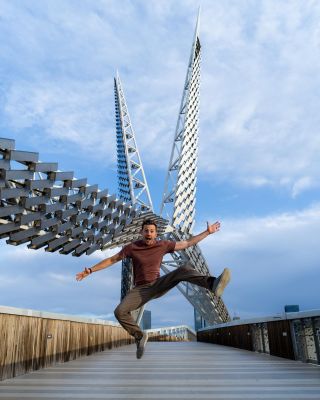 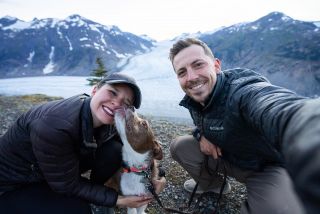 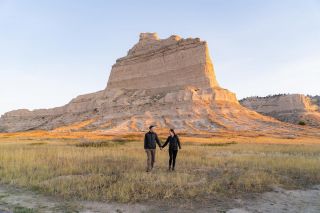