5 Things to do at White Sands National Park 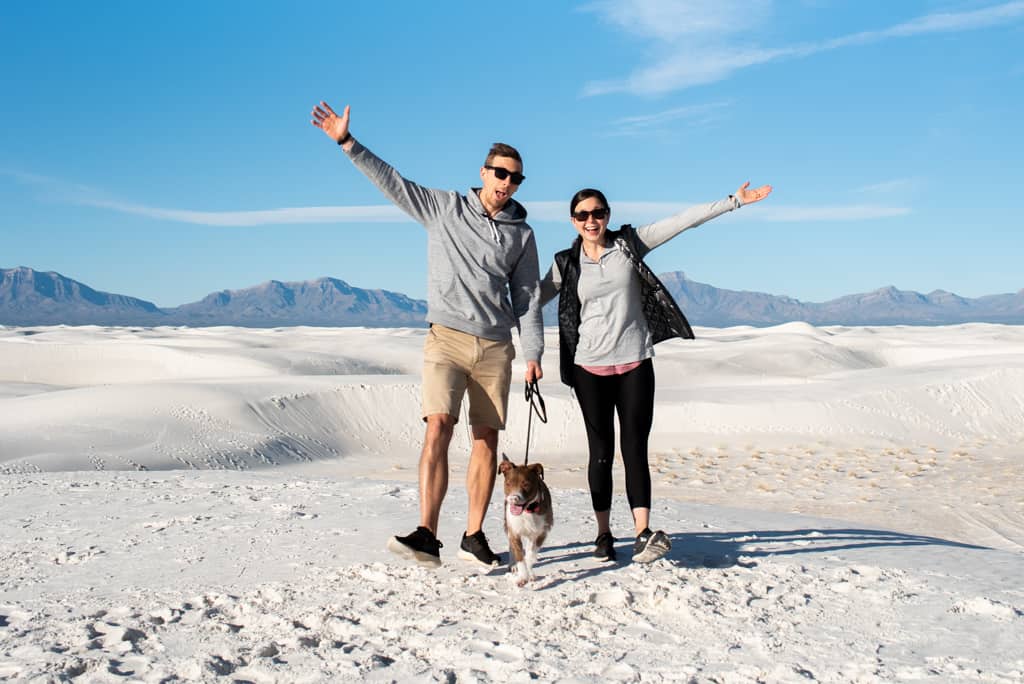 About a year ago, we took a two week road trip from Washington to Texas for the holidays. We explored the California coast, climbed to the highest point in Texas, enjoyed the quirkiness of Marfa, ate lots of tacos in San Diego, and visited many National Parks.

However, right before our trip, the government shutdown happened, which altered our plans a bit. We were unable to visit two spots that we were excited to explore: White Sands National Monument (now White Sands National Park) and Carlsbad Caverns, both located in New Mexico.

So this past weekend, on our way back to Texas for the holidays we made it a top priority to finally visit the two! We spent the weekend in Southern New Mexico playing in the sand at White Sands National Park (which actually became a National Park just a few days after we were there!), eating and drinking coffee in Las Cruces, and being mind blown at Carlsbad Caverns National Park.

White Sands truly is as magical and vast as it appears in photos. The gypsum dunes are beautiful, especially against the mountain backdrop. We only spent a couple hours at White Sands and felt that was enough to experience, but you could definitely spend longer if you’d like! Whether you have an hour or a full day, here’s our list of the best things to do at White Sands National Park, as well as helpful information about the park, where to stay, and extra activities nearby!

Want to have an epic New Mexico and Texas road trip? Check out these posts:

Before embarking on your adventure, please review the Leave No Trace principles to ensure you leave every place better than you found it, so that others can enjoy these beautiful places for many years to come!

These seven principles include planning ahead and preparing, hiking and camping on durable surfaces, disposing of waste properly (pack out what you pack in!), understanding campfire rules and always fully extinguishing your fires, respecting wildlife, and being considerate of other visitors.

The dunes are made up of gypsum, which is a pretty common mineral found in everyday products, like drywall and toothpaste (woah!). Similar to salt, gypsum dissolves in water and will recrystallize during evaporation of liquid. When rain falls on the mountains behind the dunes, the layers of gypsum on the mountains start to dissolve, and the gypsum runs down the mountain to the basin floor to a spot called Lake Lucero. And when the water evaporates, the minerals recrystallize into Selenite, which then helps form the dunes.

The park has set hours, which vary based on the season. The gate to the park opens at 7 AM year-round, but the gate closes between 6 PM-9 PM depending on the month, with the last entry one hour before the park closes.

One very important thing to know about the park is that it neighbors the White Sands Missile Range and can close down for up to three hours during missile testing. You can see the schedule of closures here to make sure you don’t show up to find the park closed.

Entry into the park is $20 per car, but free if you have the America the Beautiful Pass, which is $80/year and gets you access to all National Monuments and Parks. It’s totally worth the cost!

And one of the best things about the park? It’s pet friendly as long as they are on a 6ft leash! Kona absolutely loved rolling around in the sand!

One super cool fact about White Sands is that gypsum doesn’t absorb heat like typical sand does, which means that the dunes don’t get too hot even when the sun is blasting and the temperatures are high.

However, even though the sand won’t burn your feet, the weather at White Sands National Park can be pretty brutal during the summer months. The temperature during the summer can reach over 100 degrees and with zero cover from the sun, it’ll feel pretty dang hot. We’d recommend arriving to the park as close to sunrise as you can if you plan to visit in the summer.

We visited during the month of December and the weather was great! In the shade it was a bit chilly, but in the sun it was the perfect temperature. If you want the best daytime weather, we’d suggest visiting between October-April.

Getting to White Sands National Park

White Sands National Park is located about an hour northeast of Las Cruces in Southern New Mexico. The closest major airport is in El Paso, about 45 minutes south of Las Cruces, but we have a feeling that many of you are visiting while road tripping across the Southwest!

If you’re road tripping, White Sands is a great stop if you’re making your way to Tucson or Phoenix, Albuquerque, or through West Texas. When we first attempted to visit White Sands, we visited Saguaro National Park, Guadalupe Mountains National Park, Big Bend National Park, and Marfa all within days of each other. So if you’re visiting any of those destinations, we’d highly recommend adding White Sands to your itinerary!

Where to stay at White Sands National Park

There are a few options of where to stay near White Sands National Park. As we mentioned above, White Sands is near Las Cruces, which is the largest town in the area and would be our top pick to stay in because of the amenities, but it’s also close to a couple smaller towns, like Alamogordo and Cloudcroft. Below are a handful of lodging options to check out!

Camping
If you’d rather fully immerse yourself in White Sands, you can go backcountry camping! The backcountry campground is about 1 mile each way and gives you the chance to sleep on the gypsum sand dunes for the night. If you plan to do this, keep in mind that the park gate closes at night, so you cannot leave until 7 AM when it opens in the morning. Campfires are also not allowed, but you can bring a camping stove.

Want to find campsites all over the US? Try the Dyrt PRO for FREE for one month!

The Dyrt is the #1 camping app in the US! Sign up for a FREE 30 day trial of their PRO version using our code AplusK!

The Dyrt PRO offers many incredible features to make finding campsites even easier (+ cheaper). Some of our favorite features are:

-Offline maps, so you can find campsites without cell service
-Map layers to find free camping areas (+ cell phone service map layers)
-Discounts from PRO partners and on campground bookings (up to 40%!)

5 Things to do at White Sands National Park

As we mentioned above, you could spend anywhere from 1 hour to a whole day at White Sands depending on how much time you have and what you’d like to do. But no matter how long you’re there, you’ll still get to experience how magical the gypsum dunes are! Here are 5 things to do at White Sands National Park!

By far one of the best things to do at White Sands National Park is going sledding! We are so mad at ourselves for not doing this while we were there–it looks so fun! You can bring your own sled or buy one at the Visitors Center for around $20 we believe. They say that waxed plastic snow saucers work the best on the gypsum dunes!

2. Hike one of the trails

White Sands has five different trails to choose from, including a boardwalk trail that is wheelchair and stroller accessible! Here is a list of the five trails, listed from easiest to the most challenging!

Dunes Drive is an 8 mile drive from the Visitor Center to the heart of the dunefield. The drive has great views of the mountains and dunes along the way, but the best part was that 4 miles into the drive, the road turns into gypsum, so you get to drive on the sand! But don’t worry, it’s super packed any easily accessible for any car. This is a great option if you only have 1 hour to spend at White Sands!

Once a month during January-April and November and December, rangers lead a three hour guided tour out to Lake Lucero, which is said to be the birthplace of the dunes. At Lake Lucero you’ll get to see tons of selenite crystals, which are very important to forming gypsum sand. The cost is $8/person for anyone 16 and older and $4/person for anyone 15 and younger. You can make reservations up to 30 days in advance. To see the dates of the tour, check out the schedule here.

Don’t have a sled? Don’t have much time for a trail? Don’t worry, one of the best things to do at White Sands National Monument is to just PLAY in the sand! We seriously had a blast running up and down the dunes with our pup Kona and soaking up the views of the mountains. When driving down Dunes Drive, there are tons of spots to pull over and get out into the dunes. Whether you have 30 minutes or two hours, playing in the sand will definitely put a smile on your face. 🙂

Pin this guide with the best things to do at White Sands National Park to plan your adventure! 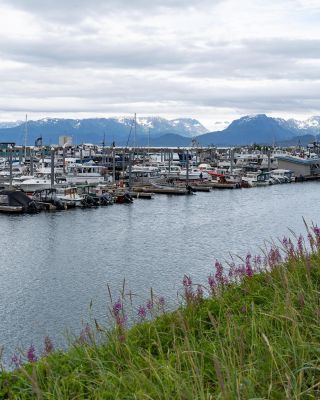 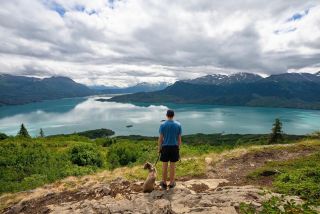 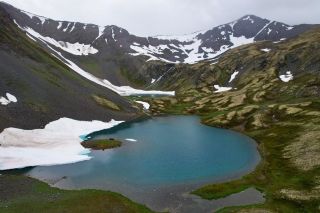 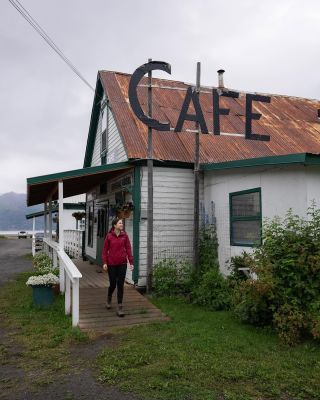 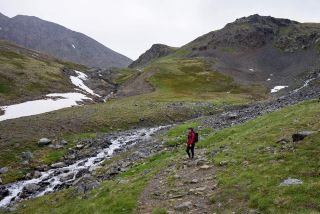 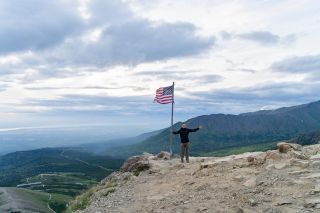 For our next adventure in Alaska we headed down to 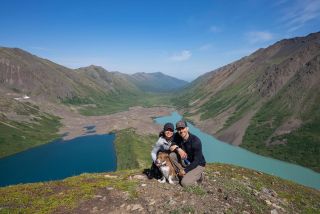 The Matanuska Glacier, which is located about 2 ho 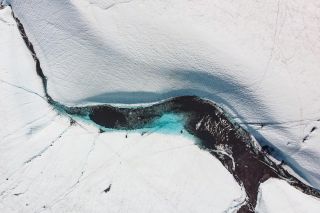